Robert Bartolen is an Event Designer based in Slovakia with a reputation for creating not
only incredibly romantic environments but theatrical ones too! This reputation has led to
many opportunities in many different locations, but he often turns to the use of one variety
of flower to create the atmosphere that he desires.

In this case, the venue was the Slovak Philharmonic theatre in Bratislava. Robert and his team created
a series of asymmetrical Gypsophila ‘trees’ festooned with white bird cages containing white doves to
welcome the guests! The ‘trees’ were combined with some large-scale arrangements which featured Lilium
longiflorum so that scent filled the air at the entrance to the event. The theme continued through to the
table centres where the two varieties of flowers were combined in simple arrangements in tall glass vases.
We asked Robert why he had elected to use so much Gypsophila and his answer was illuminating. By using
the Gypsophila en masse like this, Robert felt that it created a perfect atmosphere for romance. The doves
in their cages finished the ethereal theme and, combined with the scent from the lilies, romance was in theair!
Robert explained that he often works with massed flowers because it creates immediate impact and – it did! 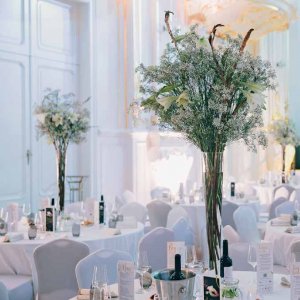 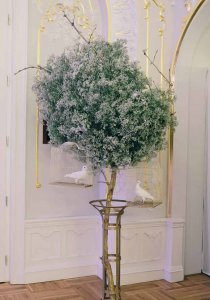 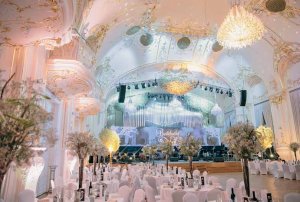 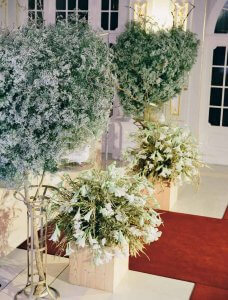